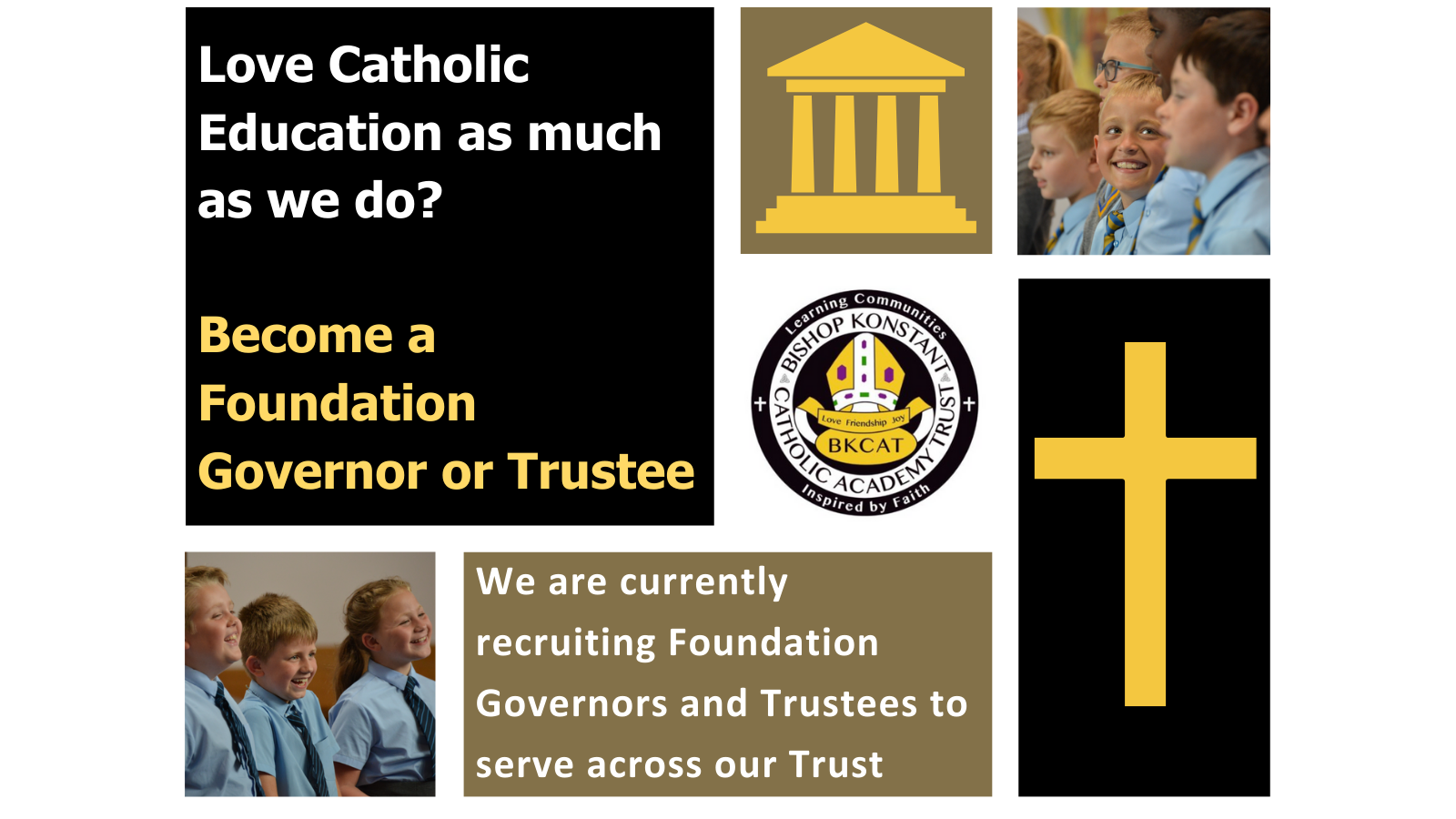 Becoming a Governor or Trustee

Letter to parents regarding becoming a Governor-Trustee

Do you have a keen interest in education and feel you could make a positive contribution to the work of an Academy Council or the Trust Board?  If so, we would like to hear from you.

The Bishop Konstant Catholic Academy Trust Board governs the Trust.  Each academy has an ‘Academy Council’ made up of Governors who are involved in the leadership and management of the academy at a strategic level.  The Trust Board delegate many responsibilities to Academy Councils.

Governors hold school leaders to account for educational standards and performance of the academy whilst ensuring that the Catholic faith is at the heart of our academies.

What do Governors do?

Governors are volunteers who are responsible for strategic leadership and accountability within academies.

The key functions of an Academy Council include:

Some of the things Governors may be responsible for are:

All Governors, regardless of their type are elected or appointed with one common purpose – to govern the academy in the best interests of pupils.

Are you looking for a way to live out your faith and serve your local community at the same time?  If so, becoming a Foundation Governor could be just the thing for you.

Foundation Governors play an important part in maintaining and developing the Catholic character of academies.

Each Academy Council has six Foundation Governors and they always have to outnumber all other categories of Governor by two so as to ensure the preservation and development of the Catholic character of the academy.

Interested persons must complete an application form for consideration by the Bishop who makes these appointments.

A Parent Governor is a voice from the parent body, not the only voice of the parental body.  The Academy Council as a whole will take steps to understand what parents think, while acknowledging that anyone on the Academy Council who is a parent themselves has valuable knowledge and perspectives about the academy to bring to bear in discussions and decisions and helps to guarantee that there is a link between governance and the parent community.

Parents of children at the academy with an interest in becoming a Parent Governor should contact the Headteacher or Chair of the Academy Council of the relevant academy who will advise whether there is a vacancy.

The Academy Council invites nominations from all staff employed to work at the academy.  If there are more nominations than vacancies available, an election is held by secret ballot and the successful candidate is appointed as a Governor.

Employees of the academy with an interest in becoming a Staff Governor should contact the Headteacher or Chair of the Academy Council of the relevant academy who will advise whether there is a vacancy.

The average Governor role will take up about 10-12 hours per month. However, this can vary depending on the academy’s calendar or by events, such as an Ofsted inspection.

This commitment includes the minimum requirement of attending up to six meetings of the Academy Council and any Committees that have been established. The Committees will focus on areas such as finance, curriculum, pupil progress and site management.  Meetings are usually held in the evening/late afternoon and last up to 2 hours.

Governors are encouraged to visit the academy during the school day to gain a deeper understanding of the academy.  In addition, it is expected that Governors will attend at least one training event each academic year.

Governors serve for a four-year term of office.

Support for Governors; training and development

The world of education changes very quickly, from new curriculum planning, new Ofsted frameworks to funding and safeguarding responsibilities. Governors in our academies must ensure they understand the mission of Catholic education, the inspection of Catholic schools and above all how to ensure the ethos of a Catholic school pervades all the school does and makes it distinctive from other forms of education in working with the families and parishes in its area.

All Governors have access to ongoing support, advice and guidance to help them in their roles. Governor training and development opportunities are offered by the Trust, Diocese, Local Authorities, National Governance Association and other training providers. In addition, Governors may request bespoke support and training tailored to suit their needs.

To be eligible for an appointment as a Governor applicants must be over the age of 18. Foundation Governors are required to be a practising Catholic.

Further details of the eligibility and disqualification criteria can be found on the application form.

We use cookies to ensure that we give you the best experience on our website. If you continue to use this site we will assume that you are happy with it.OkPrivacy policy